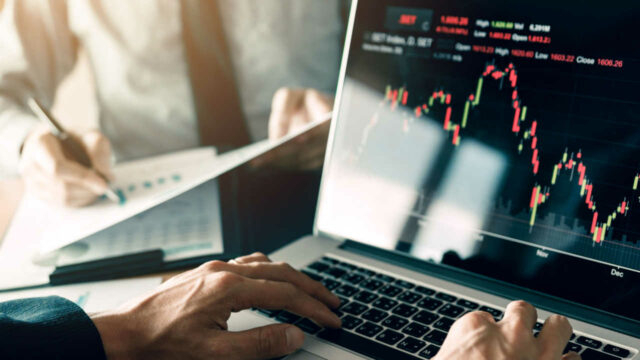 In the article series “Investing in biotech“, BioStock answers questions important to those who want to invest in the biotech sector. We have previously discussed the industry structure, the company’s focus and financing. In this fourth and final article, we discuss how to estimate the value of a biotech company. We cover some commonly used methods that can give an indication of whether a biotech stock is cheap or expensive.

As with any investment decision, a biotech investment is a game of probabilities. There are few things in the world that can be taken for granted and an important part in analysing a company is estimating the probability of a future cash flow. In the biotech industry, this becomes a particularly complex issue. The difficulty lies partly in the fact that the potential revenue is often a long way away, and partly in the fact that the scientific and regulatory process can put an end to the journey before you even get there.

How does the stock market estimate the value of companies?

Market cap is the easiest metric to look at when analysing a listed biotech company. Although the market value alone does not always say much about whether a company is cheap or expensive, it can be compared to other measures.

An attractive comparison can be to pit similar companies against each other, which is a common method in equity analysis in other industries. However, a valuation comparison between biotech companies is a blunt tool, even in cases where the companies develop treatments for the same disease. There are many aspects that distinguish seemingly similar projects from each other, e.g what phase of development are the companies in? Which patient population is targeted? How does the drug candidate in question work? What other projects are in the company’s pipeline?

What do the analysts say?

Available equity analyses can be useful sources of insight. It is good to remember that smaller biotech companies often pay the analysts for the analysis, which naturally poses the question of how objective the analysis really is.

It is also good to not focus too hard on a suggested target price or recommendation or let the conclusions of the analysis guide your judgment too much. However, an analysis can be one of several jigsaw pieces for those who want to form an opinion about a reasonable valuation of a biotech company.

An established way of estimating the value of companies in the sector – and a preferred model for analysts – is to make a so-called risk-adjusted net present value calculation (“rNPV”). Such a calculation attempts to estimate the future revenue that the drug candidates in the company’s portfolio may generate. When doing such a calculation, you have to consider each drug candidate individually. The following questions need to be answered:

We also need to consider the cost side, e.g. costs for follow-up studies, marketing costs, etc. When future revenues and expenses are estimated, the net present value is calculated by discounting the projected cash flows. The discount rate varies depending on the general interest rate, the risk appetite in the market and the financial conditions of the company. A larger pharmaceutical company often use a discount rate of around 10 per cent, but the rate can be up to 20 per cent for smaller companies.

By risk-adjusting the development risk as described above, we finally get an estimated net present value for the drug project. The value is a rough estimate of the potential, given the great uncertainty inherent in each assumption made in the calculus. Small adjustments in these assumptions can have a large impact on the present value yielded by the calculation.

What deals have been made in the company’s area?

As we discussed in the first part of this article series, the licensing deal plays a central role in the development landscape that has emerged during the past twenty years. A fourth approach to estimating the value of a biotech company is to compare its market capitalisation against completed deals with similar drugs that target the same patient group.

The development of treatments for prostate cancer can serve as an example. A relevant deal here is when Chinese Jemincare recently licensed out the drug candidate JMKX002992 to Roche and Genentech in a deal valued at a total of 650 MUSD.

This can then be set against the market capitalisation of, for example, Swedish LIDDS, which with its most advanced drug candidate Liproca Depot targets prostate cancer. At the time of writing, the company is valued at approximately 220 MSEK – and even if the comparison with JMKX002992 is not perfect, the deal can still serve as a benchmark for Big Pharma’s willingness to pay in the indication area.

Read more about valuation in biotech

In this article we provide a brief overview on how a biotech company can be valued. Estimating the value of a biotech company is a complex exercise where you need to consider a number of unknown factors. For a more detailed discussion of valuation in biotech, we recommend the book Biotech Valuation – A playbook for dealmakers from 2021 by Tobias Thornblad and Björn Carlsson. Read more.