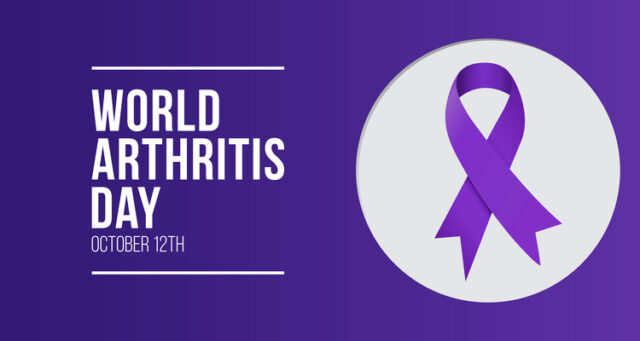 World Arthritis Day takes place today October 12th and aims to raise awareness about rheumatic diseases. BioStock had the opportunity to talk to the Swedish Rheumatism Association about how these diseases affect patients’ everyday lives.

World Arthritis Day was established in 1996 by Arthritis and Rheumatism International (ARI) and is today organised by the European Alliance of Associations for Rheumatology (EULAR). The day is intended todraw attention to and increase knowledge of rheumatic diseases among healthcare providers, decision-makersand the general public.

Rheumatism is a collective term that encompasses about 200 diseases and conditions characterised by pain and impaired movement function in joints and other musculoskeletal parts of the body. In industralised countries, rheumatic diseases are all too common – in fact, one third of individuals are affected at some point during their lifetime, according to EULAR.

Rheumatism is usually caused by inflammation

There are several Swedish companies developing new treatments for rheumatism. Two of these are Umeå-based Lipum and Malmö-based Cyxone, that develop drug candidates SOL-116 and Rabeximod respectively, both with the ambition to inhibit inflammation and alleviate the painful symptoms.

Lipum is aimed at patients with RA and juvenile idiopathic arthritis (JIA), also known as childhood rheumatism, which is a rare disease debuting before the age of 16. Many of the patients do not respond to existing treatments and must therefore learn to live with their painful symptoms. This is something Lipum wants to change through the therapeutic antibody SOL-116, which blocks bile salt-stimulated lipase (BSSL), a previously overlooked target molecule in the immune system.

Cyxone develops drug candidate Rabeximod as a new well-tolerated treatment for RA in early as well as later stages of the disease. The drug candidate is aimed at macrophages that are central in the process leading to the tissue-degrading inflammation that causes the typical symptoms of RA. The company is preparing the orally available candidate for an upcoming phase II trial, which will recruit patients during 2022.

Another player that wants to improve the situation for patients with rheumatic diseases is the Rheumatism Association, Sweden’s largest patient organisation. Their mission is to gather and spread information in society about rheumatic diseases, as well as supporting research in the field and influencing politicians and other decision-makers – all to support the patients’ right to a full life.

BioStock had the opportunity to talk to Lotta Håkansson, President of the Swedish Rheumatism Association, about why it is important to draw attention to rheumatic diseases on World Arthritis Day.

First of all, would you like to tell us a little about what the the Swedish Rheumatism Association does?

– We are Sweden’s largest patient organisation with more than 40,000 members around the country. We work hard to influence decision-makers to put our issues on the agenda. Another major focus is research and wework closely with the rheumatology profession to eventually achieve our vision of solving the riddle of rheumatism.

How are patients’ everyday life, but also society at large, affected by rheumatic diseases?

– Over 1 million people in Sweden live with rheumatic diseases, so we probably all know someone with arheumatic diagnosis. However, it is not always a fully visible disease. Also, the disease usually relapses, which means that you become more affected by your illness during certain periods, making it difficult to work full-time or fully participate in activities.

»Over 1 million people in Sweden live with rheumatic diseases, so we probably all know someone with arheumatic diagnosis.«

– Of course, it is important that healthcare becomes more attentive and faster at detecting those with rheumatic diagnoses. It is also important to not only offer medications, but also to see the big picture and the importance of good rehabilitation.

Why is World Arthritis Day an important day to pay attention to?

– We need to highlight and put more focus on rheumatic diseases. On a day like this, we gather the Rheumatism Association in a variety of places around the country. We present our organisation and raise awareness of all diagnoses that fall under our umbrella.

– World Arthritis Day is an initiative of EULAR – the European Alliance of Associations for Rheumatology. This year’s theme is #Time2Research where they want to highlight the importance of research partners in both academic and clinical research.

»This year’s theme is #Time2Research where they want to highlight the importance of research partners in both academic and clinical research.«

How can you benefit from the attention a day like this generates?

– More people may become aware of the large number of people with rheumatic diseases. Of course, I also hope that healthcare can be better at working together to ensure that more people receive the best care and the possibility of good rehabilitation. If we also recruit some new members, I will be very happy!

What is your view on today’s range of treatments for rheumatic diseases?

– Above all, increased knowledge in primary care is needed. That is where the patients first come, and very often it takes a long time to get a diagnosis. We know that many people have to find their way to the right place and the right help. There is much to be desired in terms of communication and coordination in healthcare. The introduction of patient contracts can be a way to improve care. A permanent care contact is one of the key elements in these contracts, and we believe this is a factor behind the success for anyone with chronic diseases.