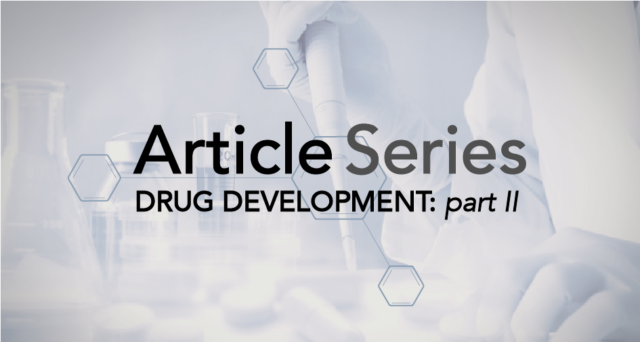 On October 1, BioStock introduced an article series on drug development. In the first post, we became more familiar with the steps involved in the long journey from drug discovery and R&D to clinical development and, finally, the market. In this second article, we dissect some of the more daunting challenges faced by biotech companies aiming to bring new drugs to the market.

Part I of this series can be found here.

The drug development process involves several steps and can take more than 10 years on average. Most of that time is spent running the pre-clinical experiments, recruiting patients for clinical trials, and then testing compounds on those patients, and regulatory stamps of approval are generally required to get from one step to the next.

Regulatory guidelines add on to time and cost burden

Receiving such approval depends largely on how well specific and strict guidelines for safety and effectiveness (GVP, GLP, GCP, GMP, GDP – more on these in part III) are followed – the requirements to meet those high standards substantially add on to the overall time biotech companies need to spend in order to get a product on the market.

This means that companies not only have to rely on scientific and medical experts, but also regulatory experts who can help navigate the intricate details of proper regulatory documentation.
Note: we will take a closer look at the regulatory requirements and guidelines for drug development in the next segment of this series. For now, we will focus on the general challenges faced by companies from target identification to market launch.

The cost of drug development is the highest mountain to climb

As time piles on during the development process, and the necessary material and human resources increase for developing an effective pharmaceutical drug, so do the related costs. Indeed, cost is probably one of the, if not the most significant barrier to getting a drug to the market.

According to the latest study by the Tufts Center for the Study of Drug Development from 2014, the average cost to develop a drug and getting it approved is a whopping 2.6 BUSD, based on a calculation that includes the money spent on failed trials. See the press release with a summary of the study here. 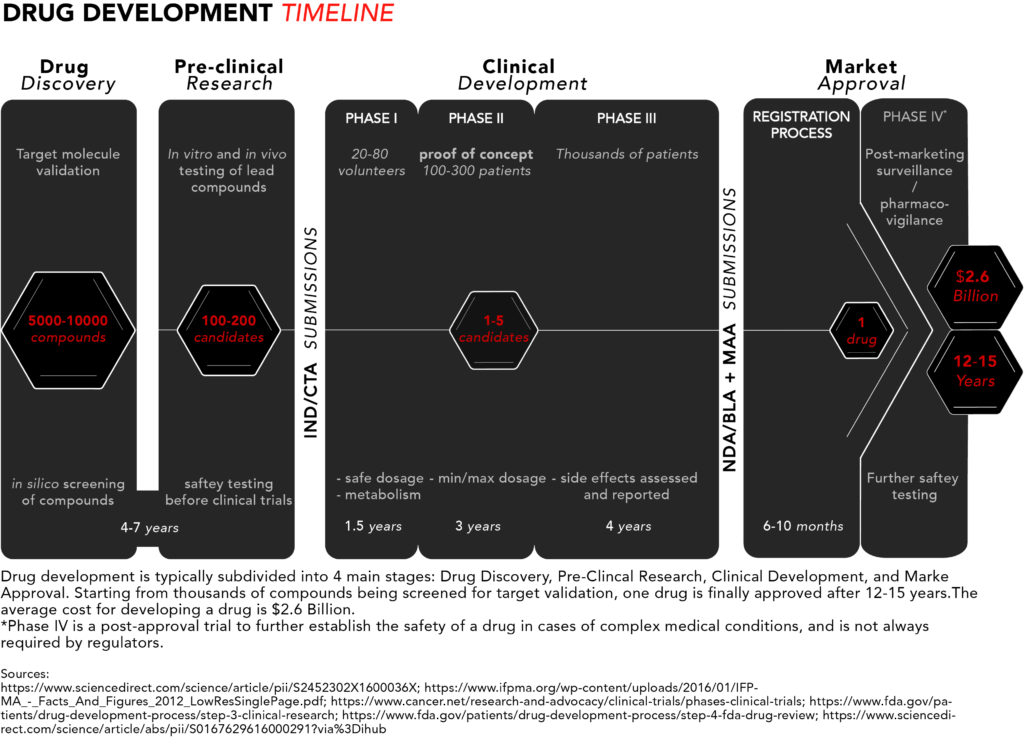 It’s worth noting that the Tufts study has come under scrutiny by several in the life science arena. Some have suggested that, due to a lack of transparency, the cost estimate is inflated to appease drug companies who use the number to justify the high cost of drugs in the US. While other studies, such as this one published in JAMA, do bring that estimate down, they are not as comprehensive.

Overall, in nominal terms, 2.6 BUSD represents an increase of 145 per cent over a 10-year period from 2003 to 2013; however, the total number of New Molecular Entities (NMEs) and Biologics License Applications (BLAs) approved has not kept up with the pace. In that same time frame, FDA approvals per year averaged 26 approvals, which is lower than the average yearly approvals (30) posted during the previous 10 years. The good news, however, is that last five years have seen the number of FDA approvals trending upwards, and 2018 saw a record 59 drugs approved.

FDA and EMA align on most approvals

It’s worth noting that a recent analysis run by the EMA in conjunction with the FDA shows that the two agencies align on market authorisations about 90 per cent of the time. Another study comparing drug approvals between the two agencies between 2011 and 2015 indicates that the FDA approves more drugs and their review process is faster on average compared to that of the EMA.

Looking at 2018 approvals however, the EMA approved only 42 new drugs compared to the FDA’s 59, signalling a possible shift in concordance between the two agencies.

Breaking down some of the approval numbers (see graphic below), last year the category of drugs with the highest rate of FDA approvals was orphan drugs, as they made up 58 per cent (34 of 59) of all drugs approved in 2018. This shouldn’t be surprising considering the Orphan Drug Act passed by the US government in 1983 to encourage companies to development drugs for a smaller market. 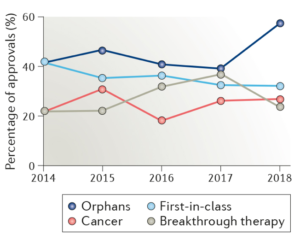 The other most approved categories of medicines in the last 5 years have been first-in-class drugs, cancer therapeutics, most of which received orphan drug designation, and breakthrough therapies – drugs that promise substantial improvements over existing therapies in serious or life-threatening diseases.

By comparison, the share of orphan drugs approved by EMA in 2018 was 50 per cent. What’s more, EMA saw a lower percentage of orphan drug approvals compared to the FDA between 2011 and 2015 as well.

Clinical trials are the most expensive stage of drug development

The Tufts University study breaks down the costs in three major categories: out-of-pocket costs (1.4BUSD), time costs (expected returns that investors forego while a drug is in development – 1.2 BUSD), and post-approval costs (312 MUSD).
Roughly 60 per cent of those out-of-pocket costs are attributed to clinical trials alone, and, as pressure mounts from the public and politicians to speed up the drug development process, companies are trying desperately to find ways of making clinical trials more efficient and less costly.

Almost half of drugs reaching phase III will fail

According to a 2018 study from MIT that looks at clinical trial data from 2000 to 2015, only 14 per cent of potential therapeutic agents making it to clinical trials have gone on to be approved by regulators. A detailed examination of the study shows that a drug on trial has a 66 per cent chance of making it from phase I to II, that number drops to 58 per cent when moving from phase II to III, and, finally, a 59 per cent chance of approval after reaching phase III. To put things into perspective, this means that 2 out of every 5 phase III drugs will fail, adding significantly to the total cost burden of drug development. 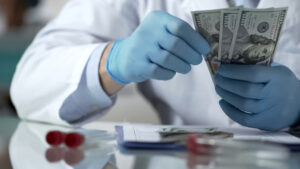 Overall, in fact, according to a report published in the National Academies Press, failures during the drug development process account for as much as 75 per cent of the R&D cost burden.

The MIT study also concluded that vaccines for infectious diseases were the most likely drugs to be approved after reaching clinical trials with a probability of success (POS) rate of 33 per cent when entering phase I. Meanwhile, oncology drugs only had a 3.4 per cent chance of approval after reaching clinical trials. Furthermore, oncology trials were also found to last longer than non-oncology trials, on average – 13 years instead of 6.5 years. As suggested by a recent study on risk mitigation in drug development, longer trial times present more risk for drug companies due to the increased need for funding. Therefore, the higher risk for oncology trials translates to lower overall approval rates.

The low rate for immuno-oncology drugs in particular is not surprising. Most failures in this field come during the first phase of clinical trials, where the human data doesn’t match the data seen in experimental animal models. This is one of the biggest concerns in drug development – finding animal models that best represent humans during the pre-clinical stages of R&D.

Another reason for the high costs of clinical trials and poor approval rates is the lack of knowledge related to a specific disease or condition. As an example, despite orphan-designated drugs representing the highest percentage of drugs approved by the FDA over the last few years (as mentioned above), drugs targeting rare diseases have been the most difficult to develop and get through clinical trials.

This is mainly because so little is known about them. In fact, the MIT study rates the POS from phase I to approval for orphan drugs to be a mere 6.2 per cent (as an average between 2000 and 2015). However, as reported by Endpoints News and Monocl Strategy & Communication earlier this year, other studies extracting clinical trial data from 2005 to 2018 show that orphan drug approvals have been on the rise and may be responsible for the sharp increase in general drug approvals in the last 5 years.

Another challenge within the drug development process is patient recruitment for clinical trials. Recruiting enough patients willing to volunteer for trials – and thus to generate statistically significant data – is not only highly time consuming, but very costly as well.
There are several other factors affecting the time and costs of drug development, such as clinical trial design, compound dose selection, efficacy metrics and data analysis. However, the stringent regulations giving pharma companies guidelines to follow throughout the drug development process play a major role in prolonging the time it takes to get a drug on the market. This will be the focus of our next segment in this article series. Stay tuned! 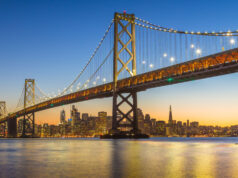