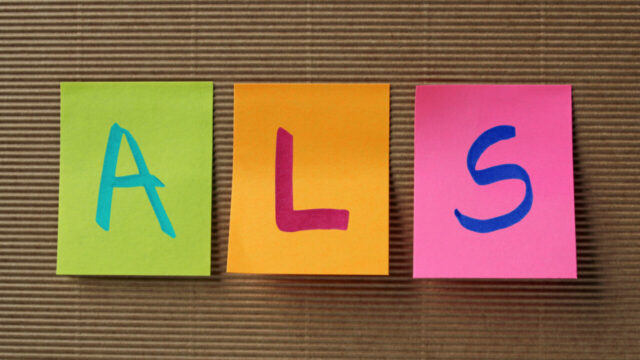 Recently, attention has again been focused on ALS. The fatal neurological disease has long been one of the biggest medical mysteries. Today, the knowledge surrounding ALS has vastly improved, largely thanks to increased attention as well as increased research funding. The investments have led to a new drug receiving conditional FDA approval this autumn, which has raised the hopes of ALS patients.

ALS – amyotrophic lateral sclerosis – was long a largely unknown disease. Its merciless course gradually paralyses the muscles with a final stage that usually means suffocation, whilst the brain is still conscious. For this reason, it has become known as the devil’s disease. Perhaps the cruelty of the disease is the reason for the great attention that ALS has attracted, despite how rare this incurable and fatal disease is.

That the disease can arouse strong emotions was evident during the Ice Bucket Challenge, a viral phenomenon that took off in 2014 and helped to drastically accelerate the fight against ALS. The campaign resulted in approximately 115 million USD in raised funds, which led to progress in research into the disease, and to a drug candidate being granted FDA approval in the autumn of 2022.

ALS – a group of diseases

ALS is a designation for a group of diseases whose common denominator is the death of motor neurons in the brain and/or spinal cord. The disease is considered to be a complex combination of heredity and environmental factors, although only about 10-15 per cent of cases can be clearly linked to heredity factors. In these cases, a mutation in the C9ORF72RE gene is the most common, followed by the SOD1 gene. This leads to protein misfolding and the formation of protein clumps – a central cause of nerve cell death.

The most common form is classic ALS, which is characterised by gradual muscle paralysis, often starting in one limb. When muscles atrophy occurs, a gradual decrease in functions such as speech, pharynx, and finally breathing take place. Other types of conditions included in ALS are progressive bulbar palsy, progressive spinal muscular atrophy, pseudobulbar palsy and primary lateral sclerosis.

The average lifespan after diagnosis is 2-5 years, although the course of the disease can vary widely. The British physicist Stephen Hawking is an example of this, Hawkings lived with the disease for a remarkable 55 years.

Only one ALS drug in Europe

Over the years, many pharmaceutical companies have taken up the challenge of developing an effective treatment for ALS. The attempts have been numerous and the successes almost non-existent.

Therefore, ALS is currently managed by compensating for the impairments and mitigating the disease’s negative effects. In Europe, the only drug approved for the treatment of ALS is Rilutek (riluzole), which received market approval from the EMA (European Medicines Agency) in 1996. Rilutek delays the course of the disease by approximately three months through a mechanism of action that is not fully understood, but is believed to inhibit processes involving glutamate – an amino acid and a signaling substance in the nervous system that, among other things, is involved in the death of nerve cells.

The lack of treatments available in Europe became obvious to the general public when the popular Swedish ice hockey player and later ALS sufferer and quickly deceased Börje Salming chose to travel to Canada to gain access to a newly approved drug.

In North America patients now have somewhat improved treatment options. In 2017, Radicava (edaravone), primarily developed by Japanese Mitsubishi Tanabe Pharma, was approved by the FDA (Food and Drug Administration), becoming the first treatment to be approved for ALS in the United States in 22 years. The drug works by removing free radicals and thus oxidative stress, which constitutes another leading theory for the disease pathology of ALS. Radicava fell short of the EMA’s study design and data requirements, and therefore the European authority did not give the drug the regulatory green light.

Five years later, in June 2022, a new hope was ignited. The controversial drug Albrioza – initially with the name AMX0035 developed by American Amylyx Pharmaceuticals and partially funded by funds from the Ice Bucket Challenge – was then granted conditional market approval in Canada. Many patients traveled to the country – Börje Salming being one of them – to access the drug.

In late September 2022, the FDA, after intense lobbying by patient groups, followed suit with a similar approval in the USA under the name Relyvrio. The drug is a combination of sodium phenylbutyrate and taurursodiol, which act in synergy by reducing mitochondrial dysfunction in motoric nerve cells, which in turn reduces the formation of free radicals as well as the death of nerve cells.

Both approvals are based on phase II data – that according to the authorities is not entirely convincing – demonstrating motor improvements and an increased overall survival by approximately 6 months. Phase III data, expected in late 2023 or early 2024, will determine the effectiveness of the treatment and determine whether the drug should continue to be sold or withdrawn from the markets.

Another application is being processed by the EMA

An application to obtain a European marketing authorisation for AMX0035 is currently also being processed by the EMA.

In December, yet more positive news was announced when Biogen communicated that it had submitted an application for marketing authorisation for tofersen for the treatment of SOD1-ALS. The rare and genetic form of ALS, for which there are no treatment options, affects about 2 per cent of all ALS sufferers. Tofersen is a so-called antisense therapy, which means that an antisense oligonucleotide, i.e. a small strand of synthetic DNA, is used for binding to the disease-causing gene’s messenger RNA (mRNA). This results in inactivation of the gene – in this case SOD1.

Since July 2022, Biogen has also submitted an application for accelerated approval for tofersen with the FDA. The authority granted the application priority review, and a decision is expected no later than April 25, 2023. In addition to this, the number of ALS projects has increased almost every year for the past decade, and today there are a number of late-phase drug projects within ALS. At the same time, intensive research is being conducted into other degenerative diseases with similar disease pathology, such as Alzheimer’s and Parkinson’s, which could help advance ALS research. This has increased optimism about nearing an answer to the ALS riddle and developing a disease-curing treatment.