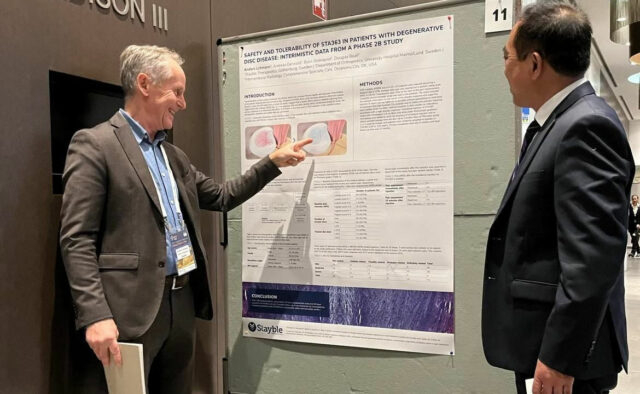 Stayble Therapeutics has recently returned from the European Congress on Clinical Trials in Pain in Vienna where the progress in the clinical phase IIb study with STA363 for the treatment of degenerative disc disease was presented. During the autumn, the company has also participated in several partnering events, most recently BIO-Europe in Leipzig, to find potential partners for phase III. BioStock contacted the company’s CEO Andreas Gerward and CSO Anders Lehmann to get to know more about the interest in STA363 and their learnings from the events.

Stayble Therapeutics is developing an injection treatment for chronic disc-related back pain. The company’s drug candidate STA363 induces a connective tissue transformation in the spinal disc, which can provide permanent pain relief after only one injection.

The effect of the treatment is currently being evaluated in a clinical phase IIb study with expected results reported in Q4 2023. After that, the goal is to initiate a collaboration with a partner who can take STA363 through phase III to market approval. The company has ongoing discussions with potential partners and has participated in several events during the autumn to meet as many potential partners as possible.

At the end of October, Stayble Therapeutics participated in BIO-Europe, Europe’s largest partnering event in life science with about 5 000 participants. During the autumn, the company has also participated in LSX Nordic Congress in Copenhagen and Nordic Life Science Days (NLSDays) in Malmö. In an interview from NLSDays, CEO Andreas Gerward says that Stayble has a clear focus on partnerships now that the phase IIb study is fully recruited and that they have had many interesting partnering meetings.

Congress on clinical trials in pain

To create good conditions for the continued clinical development of STA363, Stayble Therapeutics needs to meet other actors who develop drugs for pain, which they recently did at the 4th European Congress on Clinical Trials in Pain (SOPATE2022) in Vienna, Austria. The conference brought together many researchers, clinicians and industry experts in the field of pain. At the conference, it was made clear that there is a great need for new treatments for chronic pain, not least for back pain. However, there are some challenges with drug development in pain, for example when designing clinical trials.

Stayble Therapeutics participated at SOPATE2022 to present the study design for the company’s phase IIb study with STA363 and the preliminary study results indicate that the treatment is safe and tolerable. BioStock contacted Anders Lehmann, CSO at Stayble Therapeutics, to find out more about the conference.

Anders, what experiences do you bring home from the European Congress on Clinical Trials in Pain, SOPATE22?

– The pessimism regarding the difficulty of developing new drugs for pain is beginning to be replaced by optimism. This is largely due to that industry players now have a better understanding of how to design clinical studies on pain. As an example of this, it was discussed that the heterogeneity of the patients has previously been ignored and that too much focus has been placed on measuring pain intensity.

– It is now clear that you should also measure how much the pain affects the patient’s function in everyday life and how the patient experiences changes after treatment. I feel confident that our patients are a more homogeneous group than, for example, those who have neuropathic pain (nerve pain with often unknown cause) and that we measure both pain intensity and other parameters. It has been very instructive to meet and listen to international experts in the field.

»I feel confident that our patients are a more homogeneous group than, for example, those who have neuropathic pain (nerve pain with often unknown cause) and that we measure both pain intensity and other parameters«

High partnering activity according to the CEO

BioStock also had a chat with Stayble Therapeutics’ CEO Andreas Gerward regarding the partnering events during the autumn.

How has the interest in STA363 been at the partnering events during the autumn?

– STA363 is associated by potential partners as a treatment with several advantages that fills a great medical need. There is great interest in the treatment concept. The fact that Stayble is in phase IIb is an optimal time to initiate collaborations. We have had several interesting meetings with companies from the USA, Europe, Japan, etc. We look forward to continuing discussions with existing and new players in 2023.

»The fact that Stayble is in phase IIb is an optimal time to initiate collaborations. We have had several interesting meetings with companies from the USA, Europe, Japan«

What are the most frequently asked questions in discussions with potential partners?

– When will phase IIb data be reported?

– What results are available from pre-clinic and phase Ib?

– How is your IP situation?

– And what kind of collaboration are you looking for?

Would you like to answer the last question; what kind of collaboration are you looking for?

– We are primarily looking for a medium–sized company that sees synergies in its operations with STA363 and that has the capacity and resources to conduct a clinical phase III study and then market introduction. A company that sees the value in our asset and will prioritize it in its future development. For example, it can be a company that is strong in the fields of pain, hospital products or orthopedics. A company that is interested in global rights is at the top of the list, but we also see great value in conducting several deals with partners in the US, EU and Japan. 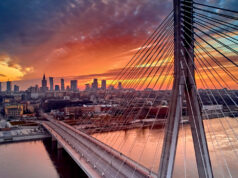 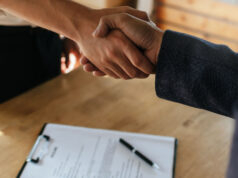 Focus on internal drug programmes and partnering for Sprint Bioscience