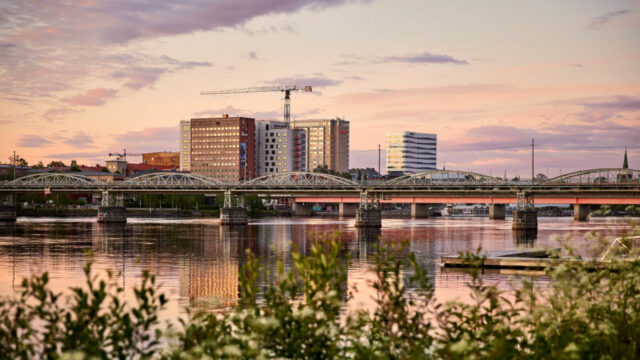 Over 70 companies having been established in the Umeå region, and the life science industry is growing stronger there. Despite the growing potential, there is a shortage of laboratories in the region, according to Lipum’s CEO Einar Pontén who joined BioStock for an interview. During the Q&A, Pontén also took the opportunity to promote the Umeå på Börsen event happening on November 17.

Lipum is developing a new biological drug for the treatment of chronic inflammatory diseases, with an initial focus on rheumatoid arthritis (RA). The company’s drug development is based on many years of research at Umeå University on Bile Salt-Stimulated Lipase (BSSL), which is a fat digestion enzyme that plays a significant role in the inflammatory process. The company’s drug candidate SOL-116 is an antibody that blocks BSSL, which is expected to provide an anti-inflammatory effect.

Lipum has its operations in Umeå, which is one of Sweden’s most important life science clusters. According to Umeå Biotech Incubator, there are about 70 life science companies in Umeå that create interest in the sector and many job opportunities.

Nordic Biomarker – an example of success

An example of a successful life science company in Umeå is Nordic Biomarker, which recently was awarded The Export Success of the Year in Sweden 2022. The prize was awarded on August 31, by Minister of Foreign Trade Anna Hallberg in the presence of H.K.H. Prince Daniel.

Nordic Biomarker develops and sells reagents for coagulation diagnostics that are used in for example blood clot diagnostics and diagnosis of bleeding disorders. The products are sold to leading medtech companies in many countries around the world. The company has approximately 80 employees and a turnover of 131 MSEK (2021).

Many ideas originate from Umeå University

Nordic Biomarker is based on research at Umeå University, just like many other life science companies in Umeå, such as Lipum and Lipigon Pharmaceuticals. Lipigon develops therapeutics for patients with lipid-related diseases. On November 17, both Lipigon’s CEO Stefan K Nilsson and Lipum’s CEO Einar Pontén will participate in the annual event Umeå på Börsen.

Lipum and Lipigon were listed on Nasdaq First North Growth Market in 2021, which increased awareness of the companies and their ability to raise capital. In June this year, Lipigon raised SEK 22.6 million through a rights issue. Lipum raised 39 MSEK in October via a directed share issue.

Another life science company originating in Umeå is Umecrine Cognition which is developing novel drugs for neurological disorders in the brain. At the beginning of the autumn, the company secured funding to initiate a phase II study of its drug candidate golexanolone in primary biliary cholangitis.

The life science industry in Umeå is expected to continue to grow – the aim is that the sector will have a turnover of 1 billion SEK and account for 1000 jobs in Umeå by 2030, according to Umeå Biotech Incubator.

BioStock contacted Lipum’s CEO Einar Pontén to get his view on the life science industry in Umeå.

Why do you think Umeå has become a breeding ground for many life science companies?

– Umeå University was founded in the 60s and was early in research in life science. In some areas, they are still globally leading. This is probably best exemplified by the 2020 Nobel Prize that Emanuelle Charpentier received for the discovery of CRISPR/Cas9 (the gene scissors) that she made at Umeå University.

– Then there is a forward-looking development of the infrastructure with Uminovahuset, as well as support from Umeå Biotech Incubator (UBI) and many more – which has led to a change in attitude. Researchers dare to believe in the possibility of starting companies in life science. Equally important has been that several private individuals and companies have contributed with venture capital.

»Umeå University was founded in the 60s and was early in research in life science. In some areas, they are still globally leading […] Researchers dare to believe in the possibility of starting companies in life science«

Which Umeå-based life science companies do you see as particularly interesting to keep track of in the coming years?

– It will be interesting to follow the continued development of Nordic Biomarker, UmanDiagnostics and Agrisera, among others. Diamyd Medical is setting up manufacturing in Umeå, which will certainly also spread rings on the water. Then there is a whole range of smaller companies that have really exciting prospects. I recommend anyone interested in investing contact the companies directly. There is a lot of expertise both in the companies and close at hand from the university, but it is also important that we can continue to attract board members with industry experience.

There seems to be a shortage of laboratories in Umeå. What can the region do about this?

– Laboratories require large investments in the form of ventilation and other things. Thus, it is almost impossible for a smaller company to build its own. Both the companies and other actors must find forms of collaboration that make the real estate companies dare to invest and share risk with the tenants.

Does Lipum have the laboratory resources required to be able to continue your research on the drug candidate SOL-116?

– We have a solution that works well right now, but within a year or so we will need a larger laboratory for our preclinical work.

On November 17, Lipum is involved in the arrangement of Umeå på Börsen. Tell us, what kind of event is this?

– Many people are investing in stocks, and we want to raise interest in listed companies from Umeå. We hope that local commitment and increased attention will contribute to even better conditions for establishing and running companies in Umeå.

»We want to raise interest in listed companies from Umeå. We hope that local commitment and increased attention will contribute to even better conditions for establishing and running companies in Umeå.«

– The event Umeå at Börsen is arranged at REX, Rådhustorget in Umeå, and can also be followed via a digital live broadcast from 6 pm on November 17. Participating companies, other than Lipum and Lipigon, are Codemill and Vitec Software Group which have been listed on the stock exchange for over 20 years. Read more and sign up here.