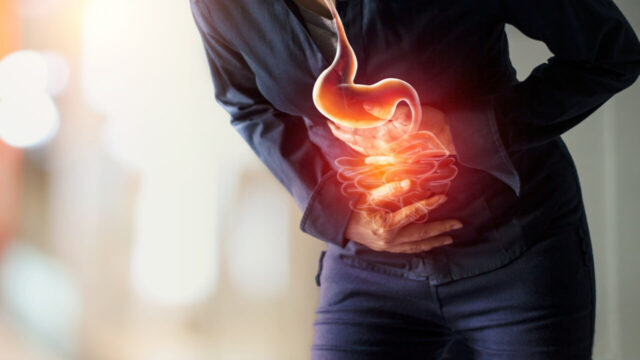 With a prevalence of 11 per cent, IBS is considered one of the world’s most common conditions. Although innocuous, it significantly impacts the sufferer’s quality of life and leads to high societal costs. Today, there is no effective pharmacological treatment for IBS, but research is still ongoing to solve the riddle and achieve a breakthrough.

IBS – irritable bowel syndrome – has a prevalence of a whopping 11 per cent, corresponding to almost one billion sufferers worldwide. It is thus one of our most common public diseases. The symptoms, which mainly consist of abdominal pain/discomfort and a change in bowel habits, can have a great impact on quality of life, and besides, be socially disabling for the individual. IBS also entails high societal costs through healthcare consumption, reduced work ability, and sick leave.

IBS is a chronic condition with a relapsing course, which means that the symptoms improve and worsen over time. In addition to pain and a change in bowel habits, it is often characterised by an increase in symptoms by stress and certain foods such as fermentable carbohydrates. It is considered a functional disorder, which means that no molecular or structural changes in the intestine can be detected. On the other hand, it has been determined that IBS involves a disturbance in both the motility and sensation of the intestine as well as signalling to and from the intestine and the brain.

But what does IBS really mean to the patient? First, a few words about digestion are required. In order for food to be transported in the right direction and speed through the intestine, muscles in the gastrointestinal (GI) wall need to alternately contract and relax, which is done with the help of hormones and nerve signals. The GI tract has its own nervous system with over 100 million nerve fibres that largely work independently, but are also directly connected to the brain and react to the same chemical signals, including serotonin. In IBS, the motility in both the small and large intestines is either too powerful, too weak, or uncoordinated.

IBS can thus be divided into three different types;

For a long time, there have been questions about whether the pathological mechanisms in IBS are psychological or biological. The lack of knowledge is probably largely responsible for the fact that, despite the high financial burden and huge market, effective treatments are still lacking.

However, recent research has led to greater clarity on the risk factors associated with the condition, and, like many other public diseases, the cause has been shown to be multifactorial. Contributing factors are primarily stress and a disturbed gut-brain axis, intestinal infection and a change in microbiota. However, it is not fully understood how these factors interact.

Our stomach harbours approximately one kilogram of intestinal bacteria – the microbiota. These are involved in digestion and secrete metabolites that are either harmful or beneficial to the intestine. Thus, the bacteria can simplistically be divided into “good” and “bad.”

A strong risk factor for developing IBS is intestinal infections, caused by bacteria such as Campylobacter or Escherichia coli, and when the condition occurs after such an event, it is called post-infectious IBS (PI-IBS). Intestinal infections can cause IBS symptoms partly through a shift in the composition of gut microbiota where bad bacteria take over – so-called dysbiosis. This negatively affects the intestinal environment and can cause bile salt malabsorption and accompanying diarrhoea.

Furthermore, research has shown that the dysbiosis that often follows in PI-IBS can cause an overrepresentation of certain immune cells in the intestine, which by secreting pro-inflammatory substances can irritate the nerve cells in the area and make them extra sensitive to stimuli, such as mechanical pressure from food. This is seen as a partial explanation for why pain and discomfort are widespread symptoms of IBS.

In addition, studies have shown that 38 per cent of IBS patients test positive for SIBO (small intestinal bacterial overgrowth). This strengthens the thesis of dysbiosis as a contributing cause of IBS.

Stress has been shown to be another key contributor to IBS, affecting the GI tract in several ways. When stress hormones are secreted in the GI tract, the growth of bacteria is modulated by the reduction in numbers of certain good bacteria such as Lactobacillaceae. In addition, stress causes the blood flow to be directed away from the stomach, which results in lower oxygenation of the intestinal mucosa – where many species of bacteria reside – also negatively affecting the gut microbiota.

Furthermore, stress has an influence on the neurotransmitter serotonin, which has a role in regulating the movement of the intestinal muscles, and is an important part of the intestinal sensory signalling that takes place through the gut-brain axis. In IBS, the signalling of serotonin is altered in both the brain and the gut, where elevated levels are seen in IBS-D and PI-IBS, and lower levels than normal are shown in IBS-C.

Widely known, stress is a constant factor in the lives of many modern people, which is problematic in many respects. In relation to IBS, this means that the prevalence is hardly predicted to decrease in the near term. Instead, it is likely that the need for effective treatment will increase soon.

A breakthrough in IBS treatment?

Research into the treatment of IBS has not achieved the same success as, for example, IBD (inflammatory bowel disease), largely due to low investment interest. It is likely that the difficulties in attracting capital to the field can be linked to the previous information gaps regarding the pathophysiology. However, today’s improved state of knowledge in combination with the market size constitutes an incentive to develop effective treatments for the condition. Indeed, things have started to move in the field, which will be the subject of BioStock’s next IBS article. Stay tuned!