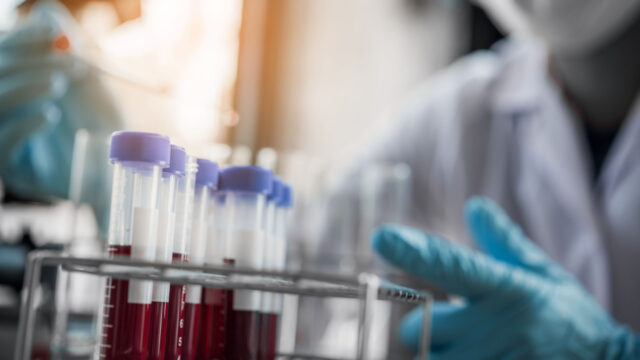 Aptahem is nudging closer to its biggest milestone as a listed biotech company – the  first clinical studies with Apta-1, a drug candidate designed to serve as an emergency treatment for sepsis and the life-threatening conditions that can arise from it. The latest sign that the company activities are simmering beneath the surface was when an application for study initiation was recently submitted to the authorities. BioStock contacted CEO Mikael Lindstam for an operational update.

Common infections should not be downplayed – a conclusion drawn by many who have suffered from sepsis. Over 50 million people worldwide suffer from sepsis every year, which means that an infection has reached the bloodstream via, for example, a wound. If treatment is not initiated quickly, sepsis can, among other things, lead to life-threatening organ failure and this is the reason why 11 million of those affected die.

The body’s own inflammatory system has been developed to fight bacteria and other substances foreign to the body. These can enter the body via the skin, mucous membranes, open wounds, internal injuries, etc., and cause inflammatory symptoms that the body sometimes cannot handle. This increases the risk of suffering from sepsis and septic shock, which in turn can lead to multiorgan failure and death. Today, this condition is initially treated with antibiotics ­– an easily accessible treatment option that, however, has the major disadvantage of increasing the risk of antibiotic resistance.

About 2/3 of sepsis cases are caused by bacteria, and for the remaining 1/3 even antibiotics do not help. Other treatments may consist of various anti-inflammatory or anti-coagulation and blood pressure-raising drugs to counteract septic shock.

These suboptimal treatment procedures have created a medical vacuum in which Malmö-based Aptahem has niched itself, with the main focus being to take the drug candidate Apta-1 through clinical studies to market approval and finally to the needy patients through partnerships.  Partly, the goal is for more patients to survive, and partly to be able to counteract any permanent harm that may occur after the sepsis has been overcome.

Aptahem’s preclinical programme, where Apta-1 has been compared with several market-leading anti-inflammatory and anticoagulant/thrombotic drugs, indicates that Apta-1 has the potential for several desired effects with bearing on sepsis and its sub-indications.

These include reducing the risk of blood clots, slowing down the body’s uncontrolled inflammatory response, repairing or inhibiting tissue breakdown and modulating the body’s own immune response, without side effects. In the next step – clinical studies – it remains to be seen whether the company can replicate this promising data and offer improved survival and organ protection.

According to the company, what potentially distinguishes Apta-1 from other candidates in development, is that Apta–1 can treat both coagulation and inflammation–related problems, while the others, according to Aptahem, only treat one of these two areas.

To get a more detailed update of what is happening in the company right now, BioStock contacted Aptahem‘s CEO Mikael Lindstam.

Mikael, you have recently submitted an application to the authorities to start clinical studies.  What is the timetable going forward?

­- It is true that in September we applied to the authorities in the Netherlands to start our clinical phase I study with Apta-1 in healthy volunteers. Unfortunately, I do not have an exact date on when we can obtain this approval, but hopefully it will be a quick and smooth process where our extensive preclinical material and not least, our very elaborate application, will lead to a positive outcome. In addition, the authority has 60 days to give a decision.

What’s the next immediate step after a possible regulatory thumbs up?

– We have been preparing for a while now and this year we signed an agreement with the clinical contract research organisation The Centre for Human Drug Research (CHDR) in the Netherlands. After the authorities approval, they can start the work of recruiting healthy volunteer subjects to the study. We have also visited them several times to completing the documentation for the authority in the Netherlands and we will continue to visit CHDR where the study will be carried out to ensure that all preparations have been carried out correctly and that everything is in place before the start of the study. As Apta-1 is a complex substance, we have needed to conduct several more studies, have more discussions and preparations and everyone involved has worked so long and purposefully towards this milestone, that the start of the study will be a big moment for the company.

You recently had an advisory meeting with BfArM, the medical regulatory body in Germany under the authority of the German Ministry of Health. Why did you have a meeting with the German authorities when the study is to be conducted in the Netherlands?

– Firstly, it is pure formality to conduct such a Scientific Advice Meeting, and it is done to confirm that there are no ambiguities, and that all documentation is in place before an approval to start the study. The fact that the meeting took place with the German authority Bundesinstitut für Arzneimittel und Medizinprodukte (BfArM) and not with the Dutch counterpart, is because BfArM has world-leading experts in the field of oligonucleotides, which is the type of chemical substance to which Apta-1 belongs. It was the very best way to optimise the conditions for a quick processing and to avoid possible problems later on.

– It should be borne in mind that aptamers, just as you mentioned earlier, are a relatively new type of drug class on the market. Therefore, the same guidelines and regulations regarding the requirements for the manufacturing process do not exist. The meeting turned out well and a subsequent written report confirmed that we meet all the requirements. Of course, it is a relief to have this confirmed by such a leading authority in Europe.

What does the interest look like for Apta-1 today compared to a year ago?

– I think that interest has increased the more we have unveiled Apta-1’s mechanism of action and the models that have repeatedly demonstrated its unique properties and as the company has climbed the development ladder. More people are starting to open their eyes to our aptamer-based technology and many more people today, than a couple of years ago, have a good understanding of how Apta-1 works and how the innovation is intended to work in patients with sepsis. We have observed this interest across the whole spectrum, from industry to academia and it is of course fun but also, if I may say so myself, well deserved. It will probably also make our continued work easier to find partners in academia as in the industry. We have a first-mover advantage in this field, which is both a challenge and an advantage at the same time, but that it creates interest is obvious.

Finally, what else does the company have to do in addition to the preparations for the clinical studies?

– Our collaboration with the research team in Toronto led by Professor Mingyao Liu, who is doing various studies in a corona-virus lung injury model, continues according to the plan laid out at this summer’s meeting in Toronto. Earlier this year, we announced that studies showed additional positive biological effects of Apta-1 and how it would potentially work in patients with coronavirus.

– In addition to this, collaboration with Örebro University, led by Professor Magnus Grenegård, continues in parallel. Last spring, we were part of a new consortium with, among others, Örebro University with a joint research project aimed at developing new drug candidates for inflammation with new therapy models targeting vascular inflammation, thrombosis and breast cancer, which is also the name of the project. This project, which has received funding from the Swedish KK-stiftelsen, is on the planning stage, and is expected to begin later this year. We will provide it with Apta-1 and contribute with expertise from Dr Luiza Jedlina as scientific advisor regarding aptamer-based drugs and especially for Apta-1, including inhibition of inflammation and thrombosis.  As can be seen, our candidate attracts great interest, so I and the team behind Aptahem look to the future with confidence!