Home Interviews BioInvent and CASI on their collaboration 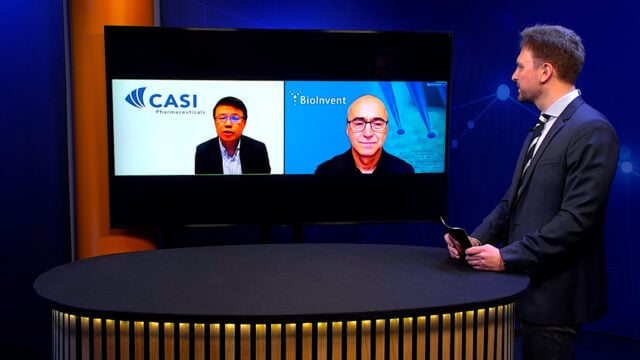 In a BioStock Studio exclusive, Martin Welschof, CEO of BioInvent and Wei-Wu He, Chairman and CEO of the American biopharma company CASI Pharmaceuticals, joined the programme to talk about the collaboration between the two companies around the development of drug candidate BI-1206. Among other things, they discussed the reasons behind CASI chosing to partner with BioInvent, the market potential for BI-1206 and the next clinical development step for the candidate.

In 2020, Swedish BioInvent entered into an exclusive license agreement with CASI Pharmaceuticals, an American biopharma company with established clinical development and a commercial infrastructure in China. The agreement involved the development and commercialisation of the anti-FcγRIIB antibody BI-1206 for mainland China, Taiwan, Hong Kong and Macao.

Under the terms of the agreement, BioInvent and CASI will develop BI-1206 in both liquid and solid cancers, with CASI being responsible for commercialisation in China and associated markets. Upon signing in October 2020, BioInvent received an upfront payment of 12 million USD and is eligible to receive up to 83 million USD in development and commercial milestone payments plus tiered royalties in the high-single to mid-double-digit range on net sales of BI-1206.

In the studio interview with Dr. Wei-Wu He, Chairman and CEO of CASI Pharmaceuticals, and Martin Welschof,CEO at BioInvent, we learn more about the collaboration and what to expect next. Watch the interview below.