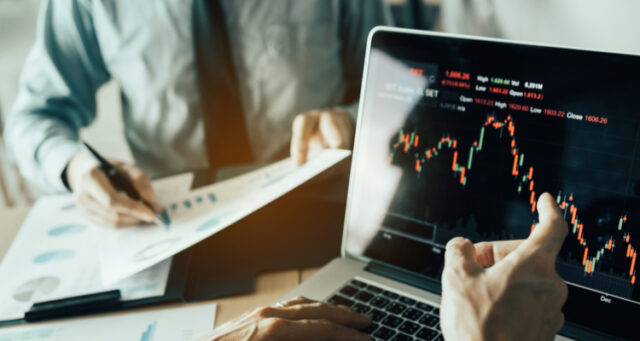 The shaky start to the year on the stock market was marked by Omicron outbreaks and extended restrictions, combined with an increased focus on inflation control from central banks. Few had expected the extent of the invasion in Ukraine, something that was also a major theme for stock markets during the quarter.

Towards the end of March, stock markets recovered and returned to pre-war levels. Overall, however, the Stockholm Stock Exchange’s All Share Index slipped in the first quarter by 14 per cent, and OMXS30, which consists of the 30 most traded companies on the large-cap list, was not far behind with a decline of 13 per cent.

The leading U.S. indices also showed a similar trend, with the broad S&P 500 falling 5 per cent in Q1, while the Nasdaq lost 9 per cent. The life science-focused Nasdaq Biotechnology Index fell 12 per cent.

Inflation control on the agenda

There were several reasons for the negative start. One contributing factor was the highest inflation rate in 40 years – in February  U.S. inflation reached a rate of 7.9 per cent – something that caused central banks to react. The signals of upcoming interest rate increases were sent during the winter, giving rise to speculation about both pace and scope of the hikes.

When the FED finally raised the interest rate by 25 basis points in March – the first hike since December 2018 – the chair also took the opportunity to flag for further hikes at each remaining meeting in 2022. The hawkish announcement effectively held back the stock markets, combined with other uncertainties in the markets.

The invasion of Ukraine was the second major cause of market turmoil during the quarter, which, in addition to creating mass displacement, humanitarian crises, and war casualties in the thousands, also exposed the world’s dependence on Russian natural resources and latent imbalances in other production chains and trade relations.

The war also affects the life science sector, most of the world’s largest pharmaceutical companies operate in the region and have faced ethical dilemmas about how to deal with the conflict without compromising the patient benefit. Read more about the topic in BioStock’s article here.

Most individual shares in the life science sector have declined in the first quarter. Only 31 of the 214 Stockholm listed companies showed positive development.

A common denominator for the quarter’s losers in life science were shares of companies announcing new issues, which was not entirely unexpected. Although it is a natural part of the development of many of the sector’s companies, the reaction has been more negative than usual, which is also natural during times of turmoil. In the stock markets, investors with different time horizons come together and everyone has their task to fulfill, even the most short-term ones.

The biggest negative movement was observed in drug developer Saniona‘s share price. The company announced late in the quarter that it is temporarily suspending its phase IIb studies with the candidate Tesomet and will dismiss 30 per cent of its staff. The news surprised the market, which after a brief trading halt pushed down the stock, which in total during the quarter lost as much as 78 per cent.

For Lund-based Aegirbio, the first quarter also meant a major drop in the share price. A strong positive price movement in the first half of 2021 was followed by unfulfilled expectations, causing the stock to plummet in the second half of last year. In 2022, the company has been working to solve its problems, but those efforts have not yet made an impact in the share price, which also lost 78 per cent during the quarter.

When it comes to stocks with the largest positive price movements, in fifth place we find Danish Scandion Oncology, which develops treatments to help cancer patients against drug resistance. The company is in phase II with its leading candidate SCO-101 and the share has risen by 22 per cent during the quarter.

Fourth place is held by medtech Nanologica, which markets and produces nanoporous silica particles for life science applications. The company moved to the main list in March and attracted increased investor attention and the share price increased by 22 per cent.

In third place was medtech company ProstaLund, which, during the year, signed distribution agreements in the UK for its personalised heat treatment of benign prostate enlargement. The stock was up 32 per cent.

The shares of First North-listed SpectraCure rose by 49 per cent in the quarter. The company develops a treatment against solid cancer tumours, focusing on prostate cancer. In January, the company announced that it had made progress in restarting its clinical trial in the US, which was delayed by the pandemic. The stock thus claimed second place on the quarter’s top list.

At the top of the winner’s list for the first quarter was Gothenburg-based Vicore Pharma with an increase of 63 per cent after presenting positive interim results from its phase II study with the candidate C21 in patients with idiopathic pulmonary fibrosis.

Here is the list of winners and losers in the first quarter of 2022.