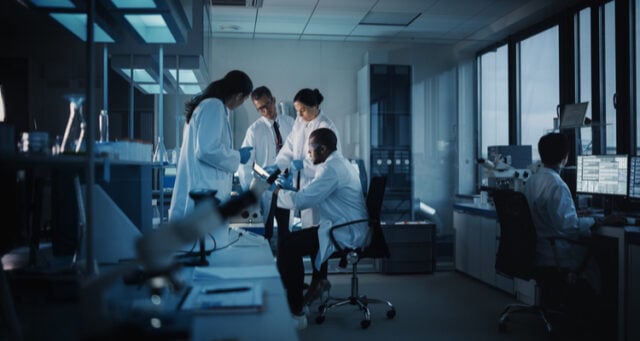 Solna-based pharmaceutical company Promore Pharma focuses on therapeutic peptides in wound care and scarring, two areas where there currently is a lack of pharmaceutical products. The lead project ensereptide is indicated for prevention of scarring, and the company is currently conducting a phase IIa study with the candidate. BioStock has taken a closer look at the ongoing study and its importance to the company.

Many patients undergoing invasive surgery end up with scars as a result, and more than 10 per cent are burdened with long-term or permanent scars. But it is not just surgery that can cause scars; all kinds of damage to the skin can lead to scarring. For the sufferer, the scars can be both aesthetically and medically troublesome and contribute to a lower quality of life. Today, there are no pharmaceutical drugs for the treatment of scars, and, according to Promore Pharma, the number of clinical trials in the field is surprisingly low. This means that the company sees great opportunities in the market for its candidate ensereptide, which targets scarring.

Promore wants to be first on the market

Ensereptide is based on an endogenous peptide, i.e., a substance that is naturally present in our immune system and thus contributes to healing. The product is applied to the surgical wound as a single-time treatment and the peptide quickly breaks down in the blood, which is advantageous from a safety perspective. The candidate’s good safety profile has also been confirmed in a phase I study. On this basis, the company intends to offer First-In-Category treatment for preventing the occurrence of scars.

Phase II-study is in full swing

An important part of these plans is the ongoing double-blind, randomised phase II pilot study, PHSU05, conducted at Uppsala University Hospital. The company began recruitment in February and announced in mid-March that it had achieved its goal of including 24 healthy volunteers, which means that the study can continue as planned.

Each of the 24 participants are inflicted six small surgical wounds on the upper arm (three on each arm), which are then randomised to a single dose of the active substance ensereptide or placebo.  The patients, who, through the study design, constitute their own control group, will then be followed up on six occasions and for a total of three months.

The study is aimed to provide important information on a number of significant parameters. The primary outcome measure is to investigate the safety and tolerability of the substance. The secondary outcome measure is medical efficacy. This will be done through visual estimation scales by both the patient and the physician. The third measure of outcome is a histopathological analysis that provides both quantitative and qualitative information about scarring. Overall, these outcome measures are intended to provide information and guidance for the next set of clinical studies.

Results around the turn of the year

The company estimates that the last patient’s final visit will take place in the middle of the summer, and it plans to communicate when this happens. During this visit, a tissue biopsy is taken, after which a histological analysis will be carried out. In normal skin, fibres of collagen and other macromolecules are present in a well-organised basket-weave pattern that gives the skin strength in all directions. Scar tissue, on the other hand, occurs quickly and usually lacks the weave pattern that characterises healthy and normal skin. This can be studied microscopically using various sophisticated staining methods. The histological evaluation will be carried out in two ways: by professional histopathologists and by automated image analysis. With this basis, a statistical analysis is made that is followed by unblinding and compilation of data. The plan is for this to be completed and announced around the turn of the year.

The study design comes with several advantages. Since there is a significant variation between individuals’ scar formation, the approach is well chosen, as it makes it possible to use each participant as their own control. This gives the eventual study results greater reliability, compared to a study design where the participants rather than the surgical wounds are randomised. Furthermore, the double-blind design means that neither the participant nor the researcher has any knowledge of whether active treatment or placebo is given, which is also a strength in terms of scientific quality.

Laying the foundation for future studies

The study is of great importance in the company’s work to evaluate the safety and efficacy of ensereptide. The information provided by the phase IIa study will form the basis for the design of future studies with ensereptide. On the back of positive phase IIa results Promore Pharma can optimise the design of future studies so that they are as effective as possible and thus accelerate the path to market.