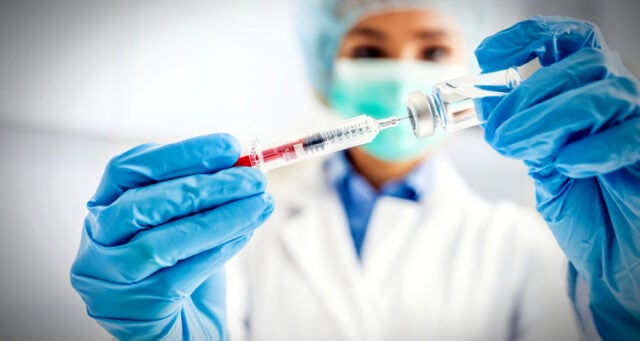 Ever since their discovery more than 200 years ago, vaccines have helped revolutionise healthcare, especially when it comes to combatting deadly infectious diseases. As vaccine technology continues to advance, scientists are finding ways to harness it in the fight against one of the deadliest illness: cancer.

In the 18th century, as the smallpox epidemic raged across Europe, scientists found that people who had previously been infected with cowpox, a milder version of smallpox, became resistant to the deadly disease. This observation led to the development of the world’s first vaccine by British physician and scientist Edward Jenner.

Jenner called this solution Variolae vaccinae (smallpox of the cow). From that moment onward, the term vaccinestuck for any form of biological inoculation meant stimulate a person’s immune system as protection from deadly disease.

Can vaccines work against cancer?

Since Jenner’s publication in 1798, vaccine technology has evolved and greatly improved. However, most of today’s vaccines target infectious diseases – illnesses caused by a pathogen like a virus or a bacterium. They activate antibodies in a person’s immune system able to identify markers – antigens – specific to the pathogen in question and mount an immune response against it when the body encounters it.

Today, BioStock takes a closer look at whether similar vaccine solutions exist to combat cancer – a disease that remains one of the leading causes of death worldwide killing 10 million people each year.

The rise of immuno-oncology

Roughly nine out of ten cancer patients die as a result of the cancer’s ability to grow back and spread, forming new secondary tumours. To counter the problem, a new frontier in cancer therapy has emerged: immuno-oncology.

Over the last decade, cancer immunotherapies have risen in popularity thanks to their ability to harness and stimulate a patient’s immune system to help it circumvent tumour resistance mechanisms. Some of the most common are T-cell therapies, monoclonal antibodies, oncolytic viruses and checkpoint inhibitors (CPIs). However, in many patients their benefits are still poor, making the need for new treatments still significant. And this is where cancer vaccines, another form of immuno-oncology, come into the picture.

Antigens specific to cancer cells are being discovered and evaluated in clinical trials as potential therapeutic targets. However, in most cases, cancer vaccines currently in development are not aimed at preventing cancer altogether (so-called prophylactic cancer vaccines). This is because the disease is caused by mutations in an individual’s genetic code, and such mutations are different from person to person.

Thus, developing a vaccine against one type of cancer may work in one patient, but perhaps not in another. Therefore, finding antigens specific to cancer, able to elicit a strong immune response, remains one of the most difficult tasks for researchers in this field.

There are, however, shared biological markers for relapsed and metastatic cancers. These have the potential to become cancer vaccine antigens for preventing metastasis, which, as alluded to, is when cancer is in its most dangerous state. Hence, most cancer vaccine developers now focus on relapse prevention.

The hope is that a vaccine able to prevent the spread of new cancer cells (so-called therapeutic cancer vaccines), perhaps given in combination with other immunotherapies meant to further stimulated a patient’s immune system, could drastically reduce the death rate of this horrible disease.

A promising field for innovators

From the early 1990s – when researchers first cloned a specific melanoma-derived antigen to induce an immune response, until 2010, when the FDA approved the first ever therapeutic cancer vaccine, Dendreon Pharmaceuticals’ Sipuleucel-T (Provenge) – cancer vaccines were largely seen as a dream.

Today, while biotech companies still face a vast array of challenges in their efforts to develop effective therapeutic cancer vaccines, the technology advancements in the field give hope that new, much needed cancer therapies are on the horizon. In fact, according to Allied Market Research, the global cancer vaccines market is projected to reach 7 billion USD by 2027 from 4 billion USD in 2019. That translates to an annual growth rate of 12.6 per cent.

The promise of cancer vaccines is leading to stronger competition among innovators to develop new technologies in the field. As an example, American vaccine developer Moderna, known for its mRNA Covid-19 vaccine, is investing in the potential to use its technology to develop individualized, mRNA-based cancer vaccines to deliver a drug that is tailor-made to the patient’s needs.

Meanwhile, in the Nordics, companies like Immunicum, Rhovac, and Ultimovacs are working on their own cancer vaccine technologies. All three companies have their respective lead candidates in phase II of clinical evaluation, with prospects of commercialisation intensifying.

As the competition heats up, investors are watching closely, and so do cancer patients across the globe.