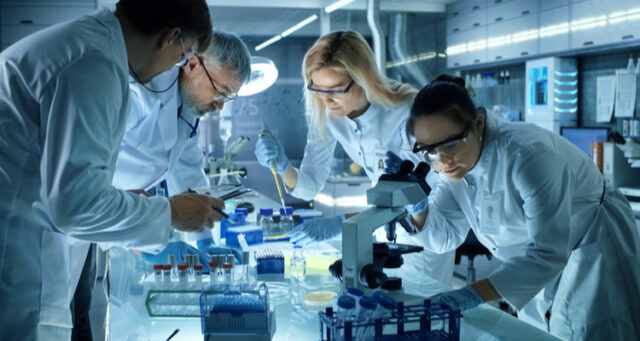 Aptahem’s collaboration with Örebro University recently led to a research breakthrough regarding a newfound pharmacological mechanism behind Aptahem’s sepsis treatment Apta-1. BioStock got in touch with Professor Magnus Grenegård at Örebro University to find out more about these fresh preclinical data and how they impact the further development of the drug candidate.

Sepsis, formerly known as blood poisoning, can occur when infections reach the bloodstream and trigger a so-called inflammatory storm. This “overreaction” of the immune system is a central cause of the life-threatening symptoms of sepsis. Distinctive pathological reactions include bleeding, blood clot formation, leaking blood vessels and a reduced blood flow in the body’s smaller blood vessels. Finally, the blood pressure drops, thereby reducing oxygenation to the body’s organs, resulting in tissue breakdown and ultimately life-threatening organ failure. Due to its serious nature, sepsis is one of the most common causes of death.

All attempts to develop a new effective drug treatment that counteracts the consequences of sepsis have so far failed, largely because sepsis is a multifactorial condition that can be triggered by several different diseases and by a simple infection.

Malmö-based biotechnology company Aptahem is developing the drug candidate Apta-1 as an emergency treatment against sepsis, with the aim of preventing the inflammatory response and thereby counteracting the tissue damage caused by sepsis.

Preclinical studies (i.e. studies conducted before a drug candidate is tested in humans) have shown that Apta-1 can slow down the body’s uncontrolled inflammatory response, reduce the risk of blood clots, modulate the body’s own defenses, and repair or inhibit the tissue breakdown that may result from the condition. According to Aptahem, this indicates that the drug candidate could potentially counteract the harmful effects of sepsis.

Hemostasis is a vital, normal body function that allows the blood to clot and stop a bleed, a process that is disrupted in sepsis. Hemostasis is also intimately linked to rapid immunological/inflammatory reactions. Hemostasis consists of two phases: a primary phase, in which blood cells called platelets, quickly clog the damaged area of the blood vessel, and a slower but more powerful phase in which proteins in the blood, called coagulation factors, cause the actual blood clotting. One of these coagulation factors is thrombin (coagulation factor IIa) which has a key role in both hemostasis and acute inflammation.

One of the many functions of thrombin is to stimulate cell surface receptors called PAR (protease-activating receptors), which activate both hemostasis and inflammation. When Apta-1 is added, thrombin loses this ability. Molecular studies show that Apta-1 interacts with a heparin-binding domain on thrombin.

Heparin is a body-specific, carbohydrate-like substance and a very common drug, a so-called blood thinner (anticoagulant) drug that prevent blood clots, but patients taking heparin are at risk of suffering severe bleeding. However, Apta-1 does not have the properties that increase the risk of bleeding. More precisely, Apta-1 reduces the risk of acute inflammation and of the appearance of blood clots without a significant risk of bleeding.

Apta-1 has the potential to counteract some of the effects of thrombin that are of great importance for acute inflammation and risk of blood clots. Thus, this opens up new avenues to control these processes in a life-threatening condition such as sepsis.

On September 7, Aptahem announced that they – in collaboration with Örebro University – had managed to define an unsold unique modulation mechanism in Apta-1 on coagulation and inflammation.

BioStock reached out to Professor Magnus Grenegård at Örebro University to get a better picture of the new research findings and what these mean for the continued development of Apta-1. We also get a detailed description of how the mechanism of action in Apta-1 differs from the thrombin-inhibiting drugs used in clinical contexts today.

Magnus, in what ways do the new discoveries contribute to the continued development of Apta-1 as a new emergency treatment for sepsis?

– A scientifically assured molecular point of view is necessary to get a drug candidate approved as a medicine. In addition, in the upcoming research, we can ensure the importance of this point of view. One must remember that there are solid preclinical research results that show that Apta-1 has beneficial effects as an emergency treatment in sepsis and what functions and processes in inflammation and hemostasis are affected. But not until now have we identified a central mechanism of action that is behind these effects.

You have identified a mechanism that allows Apta-1 to modulate thrombin more safely. Can you explain the meaning of this in more detail?

– I would rather describe it as Apta-1 utilizing the binding site of heparin on the clotting factor thrombin. This counteracts inflammation reactions and has what we can call a mild anticoagulant effect, actually a more limited ability to activate platelets. However, Apta-1 lacks the powerful, anticoagulant ability found in heparin as well as in other anticoagulative drugs. From a sepsis perspective, it is absolutely excellent – Apta-1 thus counteracts acute inflammation and is anti-thrombotic without increasing the risk of bleeding.

Finally, the goal now is to compile this new data and have these fact-checked in a scientific journal.

– Yes, it is very important that the current scientific documentation is published in a scientific journal.