Home Interviews The rise of therapeutic peptides: Follicum at the forefront 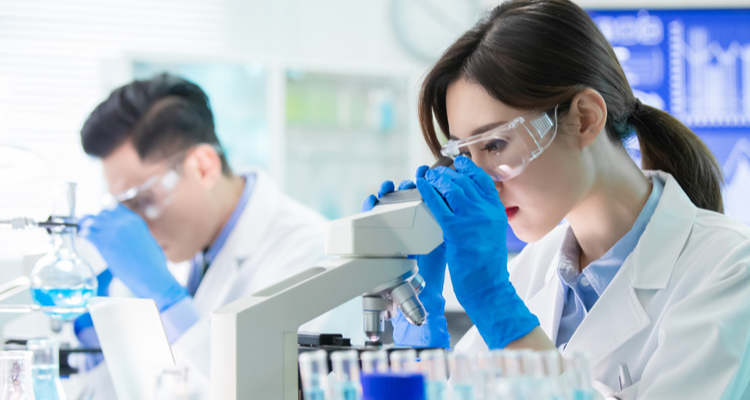 Pharmaceutical drugs are often subdivided into two fractions: small molecules and large molecules (or biologics). However, a third category called peptides falls right in-between, thus generating an overlap of benefits from the other classes of molecules. Follicum’s two projects, one against hair loss and one against diabetes, are both based on peptides, and the Swedish biotech is quickly making a name for itself within the field. BioStock takes a closer look at therapeutic peptide development.

In the world of pharmacology and drug development, the molecules used are usually classified as either small or large molecules. This classificataion helps determine the behaviour or mode of action of a drug.

Small molecule drugs are the most common form of treatment because, as the name implies, they are small, simple molecules that are easy to synthesize in a lab. These drugs are often taken orally, e.g., pain killers, and they produce the desired effect quickly. However, due to their chemical composition, the effect lasts a few hours at most.

Large molecules, often referred to as biologics, are more complex. They are most often proteins produced from living cells, and usually require an injection into a patient’s blood stream. Common examples are antibodies, vaccines, or gene therapies. Biologics, unlike small molecules, often share similarities with the body’s own molecules and bind their target(s) in the body quite specifically, making them very effective against serious conditions and giving rise to fewer side effects.

A third group of drugs is quickly rising in popularity: therapeutic peptides. They fit right in between small molecules and biologics. Like small molecules, peptides are typically produced in a lab and can exert their intended effects rather quickly; meanwhile, like biologics, peptides are frequently based on endogenous compounds and are formed by amino acids and generally present good tolerability in patients.

While biologics and peptides consist of the same building blocks (amino acids), the two are distinguished by size. A chain of more than 40 amino acids is considered a protein, e.g., an antibody, which is categorised as a biologic, while a chain of less than 40 amino acids is called a peptide, as categorised by the FDA. Despite the size difference, peptides and biologics share the fact that they are highly specific to their target and can produce a long-lasting effect.

Some amino acids are naturally occurring building blocks of peptides and proteins, and indeed some peptides may occur naturally in the body, making them easily available. However, thanks to their small size, peptides can also be produced synthetically, unlike biologics which are extracted from living cells. Due to their incredible diversity, peptides are used to treat a wide range of diseases, from cancer to diabetes, so it is no surprise that peptide therapeutics are on a steady rise.

Overall, therapeutic peptide development is considered highly attractive by pharma companies because of their high likelihood of approval (LoA) or probability of success (POS) in clinical trials compared to small molecules. This means that peptide-based drug candidates are more likely to reach the market and, consequently, patients compared to small molecule drug candidates.

Therapeutic peptides have been in use for many decades. As described in a review article out of the Ferring Institute in California, one of the first examples of therapeutic peptides was insulin therapy, which reached the clinic for the first time around 100 years ago to treat diabetes. As in the case of insulin, such peptides are typically used as “replacement therapy,” meaning they functionally replace a naturally occurring peptide or protein that is poorly produced by the body, as is insulin in diabetes patients.

At the moment, according to the FDA, there are approximately 100 therapeutic peptide products marketed in the U.S., Europe, and Japan, with annual global sales reaching 15 to 20 billion USD. Market analysts predict there will be a compound annual growth rate (CAGR) of 8.2 per cent from 2016 to 2023 for such products. The momentum seems to be strong for the field of peptide therapeutics.

Globally, there are currently more than 400 peptide drugs under clinical development, and some of them are being developed in Sweden by a biotech company called Follicum. The company’s main candidate, FOL-005, is a peptide representing a shorter sequence of the protein osteopontin and is developed to treat alopecia (hair loss).

FOL-005: a peptide against hair loss

Osteopontin itself is a naturally occurring protein in humans found mainly in bones, but that exerts important functions throughout the body. The protein plays an essential role in keeping the bones in our body strong, and it helps regulate inflammatory processes specific to several diseases including cancer and autoimmune disease. Osteopontin happens to be found in hair follicles as well.

Researchers at Follicum, in collaboration with Lund University and international collaborators, found that FOL-005 stimulated hair growth in mice. After extensive preclinical investigation, Follicum was able to begin clinical testing with an injectable form of their candidate in 2016 and has since produced promising results. Last year, the company developed a topical formulation of FOL-005, which is about to be tested in a phase IIa trial to determine the optimal topical dose for treating alopecia patients.

As FOL-005 pushes through clinical testing, Follicum has a second class of peptides in its pipeline aimed for clinical trial start by the end of the year. These new peptides have shown the ability to increase insulin production in preclinical studies, making them a great candidate for the treatment of diabetes.

For a more comprehensive summary of both projects, read here.

Right now, one of the top selling peptide drugs is Novo Nordisk’s Victoza (liraglutide), which is taken for the treatment of type-2 diabetes. The drug, which is a Glucagon-like Peptide 1 (GLP-1) Receptor analogue, takes up a large chunk of the peptide therapeutic market with close to 3 billion USD in annual sales. Follicum’s has shown in some preclinical testing with its diabetes candidate the ability to match or even surpass the beneficial effects of GLP-1, meaning that, if approved, it could potentially become a strong competitor to Novo Nordisk’s drug.

Poised for success in the peptide therapeutics field

Follicum has a lot going for it and is already seeing the fruits of the hard work put into its drug development portfolio. Just two weeks ago, it was mentioned as one of “20 European biotech companies that will be stealing the show in 2020” in an article published on LABIOTECH.eu.

Follicum’s continued success moving forward will depend on a range of factors, including a high level of experience in the field. The company’s CEO Jan Alenfall has that covered as he brings more than 20 years’ experience from pharmaceutical research and development, including several years working at Ferring Pharmaceuticals, one of big pharma’s top peptide drug developers.

All in all, with one peptide ready for proof-of-concept studies and the other about to enter the clinical stages of development within the near future, Follicum rides the rising wave of peptide therapeutics and is well placed to make an impact on the market.