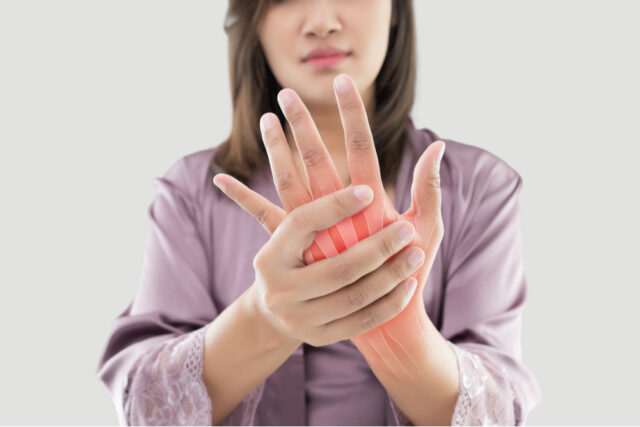 October 12th is World Arthritis Day, a global awareness day for rheumatic and musculoskeletal diseases. Malmö based Cyxone’s drug candidate Rabeximod is a disease modifying treatment for rheumatoid arthritis, a disease affecting well over 4 million patients worldwide. The goal is to provide patients with safe but effective treatment that can be conveniently taken and not only treat symptoms but importantly stop damage to the joints before extensive irreversible damage occurs. The company is in the process of designing a phase II trial for Rabeximod which is anticipated to start in the latter part of 2021.

World Arthritis Day is a global initiative that started in 1996, to highlight one of the leading causes of disability worldwide, affecting both the global economy as well as the wellbeing of millions of people. While RA is quite a common disease, it is to this date not very well understood. There are over 100 types of arthritis and related conditions with rheumatoid arthritis (RA) being one subtype. RA is an autoimmune disease that causes chronic inflammation in the joints which often makes them sore, swollen and stiff, which in turn causes pain when moving. It is also common for the inflammation to damage tissue within and around the joints, which affects the mobility of the patient and the disease can eventually, unless treated, destroy the joints irreversibly.

Symptoms vary from person to person

RA affects people in different ways and with varying degrees of severity. The disease activity level can vary over the years, leading to more severe pain, stiffness, fatigue and fever, only to later fade and halt. But it can also get more intense and worsen over the years. Most people suffering from RA experience a gradual worsening of the symptoms with time.

The four stages of the disease

The progression of RA can be split into four stages, where the first and early stage is when there is inflammation causing swelling in the joint. Cyxone believes Rabeximod can be deployed already at this stage due to its safety and tolerability profile to stop damage to the joints.

In the second stage the inflammation starts causing damage to the joint cartilage, the tissue that covers the bones at the site of joints. Aside from pain the person might experience a loss in the range of motion.

When the disease reaches stage three it is considered severe. At this stage, the cushion between the bones is worn away and the bones rub together, causing more mobility loss and muscle weakness.

At the fourth and last stage of the illness there is no longer any inflammation in the joint. The joint is dysfunctional. It may become completely damaged and the bones fused together.

Elevated risk of other diseases

In addition to the pain experienced by an RA-patient, the low mobility also elevates the risk of obesity, high cholesterol, heart disease and diabetes.  Aside from medical problems that the patient might experience, RA can make it difficult to retain a job, especially if the job is physically demanding. This presents a challenge for an individual and it also leads to high societal costs for sick leave and early retirement.

In 2017 there was an estimated total of 4,4 million people affected by RA in the US, France, Germany, Italy, Spain, Great Britain and Japan. 3,3 million of these are suffering from moderate or severe RA. According to statistics, 41 persons out of 100 000 are diagnosed with RA every year, where women are 2 to 3 times more likely than men to get the disease. The market for treating RA was valued at approximately 25 Billion USD in 2018, with an annual growth of 4,1 per cent. It is expected to reach over 36 Billion USD by 2027.

Autoimmune disease without a cure

As with many autoimmune diseases the cause of RA is unknown other than a mix of genetic and environmental factors. As of now there is no cure for RA, so the goal of any treatment is to slow or stop the progression. Treatments used today are costly, inconvenient and carry a risk of severe side effects and there is a large portion of the patients that simply do not respond very well to the treatment. This is where Rabeximod comes into play.

Cost effective treatment and a better quality of life

There are several disease-modifying antirheumatic drugs (DMARD) that are used in the treatment of RA. Of all the cases worldwide approximately 800 000 persons are treated with the chemotherapy agent methotrexate. Approximately one third of those treatments fail and must try other methods.

The next step would normally be to add or to switch to biological TNF blockers, drugs that are known to be effective, but need to be taken by injection or infusion and carry safety risks. Oral JAK inhibitors have been well received, but safety remains a concern. Cyxones ambition is for Rabeximod to be used in both early and late stages of the disease, improving the quality of life for the patient over a longer time period.

The drug is developed as an oral first-in-class candidate, which means that it has an entirely new mechanism of action delivering disease modifying efficacy with fewer and less severe side effects compared to existing drugs.

Rabeximod works by selectively inhibiting inflammatory macrophages that are central to the inflammatory process and a key orchestrator in the destruction of the joints which occurs in RA. Its selectivity for the macrophage means that Rabeximod does not impair the entire immune system and it acts at a higher level of the immune cascade than available treatments, thus is likely to be more efficacious without the risk of infections and other problems associated with immunosuppression.

Previous clinical phase II-data have given proof of the preliminary efficacy of the drug as well as shown a beneficial safety profile. The next clinical trial is anticipated to start in the latter part of 2021.

To mark World Arthritis Day 2020, The European League Against Rheumatism (EULAR) is arranging a live broadcast panel discussion on the topic “Employment risks and impacts for Europeans with RMDs during the COVID-19 recession”. The discussion will be held on October 12 14.00 – 15.30 CET. You can visit the EULAR Brussels Forum web page to learn more.