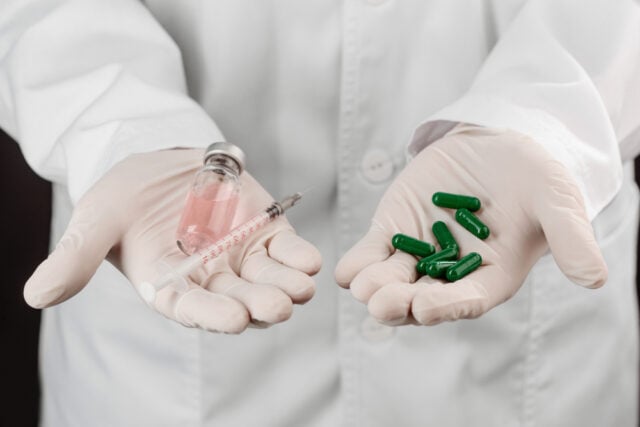 Yesterday, preliminary data from SynAct Pharma’s Phase II study with the drug candidate AP1189 in patients with rheumatoid arthritis was released. The data indicate that AP1189, administered in doses of 50 mg, is safe and well-tolerated. The blinded review of the data also indicates a substantial reduction in disease severity among two thirds of the patients, which may be attributed to AP1189. BioStock reached out to the company’s CEO Jeppe Øvlesen for a comment on the positive indicative results. 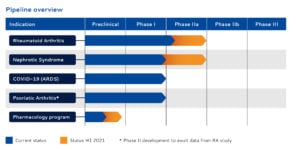 SynAct Pharma´s leading drug candidate AP1189 is a First-in-Class melanocortin receptor agonist targeted at active inflammatory and autoimmune diseases. The primary indications for AP1189 are active rheumatoid arthritis (RA) and Nephrotic Syndrome (NS), but recently the Danish biotech added AP1189 as an adjunctive therapy in hospitalised patients with Covid-19 infection in order to prevent ARDS, to it’s pipeline, given the common denominator in all three indications; an uncontrollable inflammatory response.

Based on the endogenous hormone melanocortin

SynAct Pharma’s research platform is based on the endogenous hormone melanocortin, which is activated in inflammatory conditions and contributes with anti-inflammatory effects that are crucial for the healing process and recovery to normal tissue function.

Rheumatoid arthritis (RA) is a chronic inflammatory disorder, which means that the immune system mistakenly attacks healthy cells in the body, causing inflammation and painful swelling in the affected parts of the body. RA affects not only the joints in hands, wrists, and knees, for but also organs like the skin, eyes, lungs, heart, as well as blood vessels. The tissue damage can cause long-lasting or chronic pain, unsteadiness and deformity. Thus, the disease is associated with progressive disability, premature death, and hence, also socioeconomic burdens.

While new types of medications have improved treatment options dramatically, severe RA can still cause physical disabilities. It is in this space where SynAct Pharma wants to position its leading candidate AP1189, with its potential to induce disease remission without concomitant immune-suppression and thereby increased risk for infections, both in RA and other inflammatory and auto-immune diseases.

An early add-on treatment in RA

In the ongoing study, AP1189 or placebo is dosed once daily in previously methotrexate (MTX)-naïve patients. Methotrexate, a chemotherapy agent and immune system suppressant, is one of the most effective medications to treat RA on the market.

Still, approximately 40% of the patients have an inadequate response, while next-line treatments are more efficacious, but often have severe side effects. Even with expensive injectable biologics, up to 30% still suffer from inadequate treatment.

SynAct Pharma´s strategy is to position AP1189 in this context as an early “add-on” treatment that could reduce the need for second-line treatment and/or reduce the dose levels of MTX.

Yesterday, SynAct Pharma announced that the first of two tested doses (50 mg) with AP1189 in early RA patients with active joint disease, was safe and well-tolerated, based on a blinded review of data from the company’s ongoing placebo-controlled Phase II study, which, to date, has enrolled 12 dosed patients from sites in Denmark and Sweden.

Based on these results from the double-blind study of the safety, tolerability and efficacy of AP1189, the company has decided to proceed with dosing at the next dose level (100 mg) in part 1 of the study, and to include the 50 mg dose level in part 2 of the study. It will later determine whether 100 mg is safe and tolerable and whether the dose should be included in part 2.

BioStock reached out to SynAct Pharmas CEO Jeppe Øvlesen for a comment on the released data in RA.

Jeppe Øvlesen, to begin with, the preliminary results based on the blinded data, show that administration of AP1189 seems to be safe and well-tolerated. Thus, you have achieved an important milestone in your RA project. What significance does this have for the future development of the candidate?

– For us, it is extremely encouraging to see that, according to the data, the treatment setup and the dose of the compound given to patients is safe. The interpretation on the blinded data on efficacy further support that we should continue dosing at this level in the second part of study.

– In the short-term this means that we can focus on getting a safety profile on the next dose level of 100 mg and, if this dose, which was very well-tolerated in our Phase I study, turns out to be safe in the patients as well, we can continue in the second part of the study with two doses of active compound vs placebo. That gives us a great opportunity to show efficacy and thereby confirm the potential of AP1189 as new treatment option in rheumatoid arthritis.

Going into the numbers, after a 4 week treatment period, a group of 8 patients showed a reduced clinical disease activity index (CDAI) score compared to pre-treatment levels with a median reduction of 50%, and a group of 4 patients with a worsening in their clinical status, where the median CDAI score was increased by 10%. The numbers – considering that it is the common understanding that it takes several weeks before MTX induces improvement in symptoms – sound indicative of a substantial clinical improvement, is that how you would interpret them?

– I have to emphasize that the data is blinded, the sample size is small and there could placebo treated among the subjects where we have identified a fall in clinical disease score. Saying that there is as we highlight in the PR patients that goes from high disease activity to low disease activity within the study period. Such reductions in disease activity are very seldom seen following 4 weeks treatment with MTX as monotherapy. However, we cannot exclude an extraordinary placebo effect. We have to wait to make any conclusions until we have the planned patients enrolled and unblind the data.

Considering the review of the data was blinded, it cannot be ruled out that there are placebo-treated patients among those showing clinical improvement. How does this caveat play into choosing the next dose level?

– The decision to go to the next dose level is based on the safety review not on blinded review of potential efficacy. We could have had a setting where most of the patients still had high disease activity at the end of the treatment period – which the data shows us we are not.

You plan to position AP1189 as an additional treatment given early to patients with RA, in combination with methotrexate (MTX). What reactions and support have you received from major pharmaceutical companies and researchers when presenting this new combination strategy?

– The setup is in many ways ambitious as we go in early  start dosing in parallel with methotrexate in patients with high disease activity. In these patients the physician often turns to intraarticular injections of glucocorticoids to induce pain relief in parallel with up-titration of methotrexate as the onset of clinical effect of methotrexate is slow. If the treatment profile of AP1189 in combination with Methotrexate turns out to be effective it could reduce the need for glucocorticoid injections and potentially reduce the need for second-line treatments like biologics or JAK inhibitors.

– If that turns out to be the case, the physicians would find AP1189 as a very attractive opportunity, also because the compound seems not to induce immunosuppression. The pharma industry would likewise see a big opportunity in such a scenario – where it would also serve as part of proof of our “resolution therapy treatment”.

In the press release yesterday, you state that it is unlikely that all patients in the planned 100 mg cohort in part 1 of the study will be registered, dosed and reported during the second quarter of 2020. This seems to have made the market somewhat ambivalent when looking at the relatively small increase in the share price. Would you like to comment on how your chances of success are affected by the Covid-19 outbreak?

– The Covid-19 outbreak has, until further put the recruitment in Sweden and Norway on hold. In Denmark recruitment continued but at a lower recruitment rate.  However, we now slowly see that the countries get better control with the corona situation and we hope we will get back to a more normal situation. This will help us in getting the recruitment rate up again and making it possible to get the patients for both the first and the second part of the study enrolled.

Finally, what milestones can we look forward to during the rest of the year?

– We still have the ambition for significant progress in the RA study. We expect to get the study in nephrotic syndrome up and running and then we have the opportunity in Covid-19 where we are working on the protocol and where we have had very good progress with the investigators.